Valerian Lebrun from France is the early leader at the 2022 OK Dinghy European Championship at Société Nautique de Bandol, France, after the first day of racing. He leads Bo Petersen, from Denmark and Stefan de Vries, from The Netherlands. All three won a race each on Thursday.

Following two days of mistral, racing finally got underway with three great races outside Bandol in 12-18 knots and nice waves. Bandol is a great place to be whatever the weather, but the fleet of 80 sailors from 11 countries were here to go racing and what a great day for racing it turned out to be.

Most were too keen to get going and there were a number of recalls before each race got away. De Vries showed exceptional upwind pace in race 1, only to throw it away at the leeward mark after rounding the wrong mark. However, it clawed back to first place by the final beat to take the wind from Lebrun and Petersen. Race 2 was similar, but this time Lebrun led the pack and kept a close cover on de Vries to take the win with Petersen again third.

Laurent Hay, from France, made the best of the start of the third race after a big left shift and tacked at the pin to cross the fleet and round first from Britain’s Nick Craig and Petersen. Fast downwind, Petersen took the lead to win from Craig and Hay. 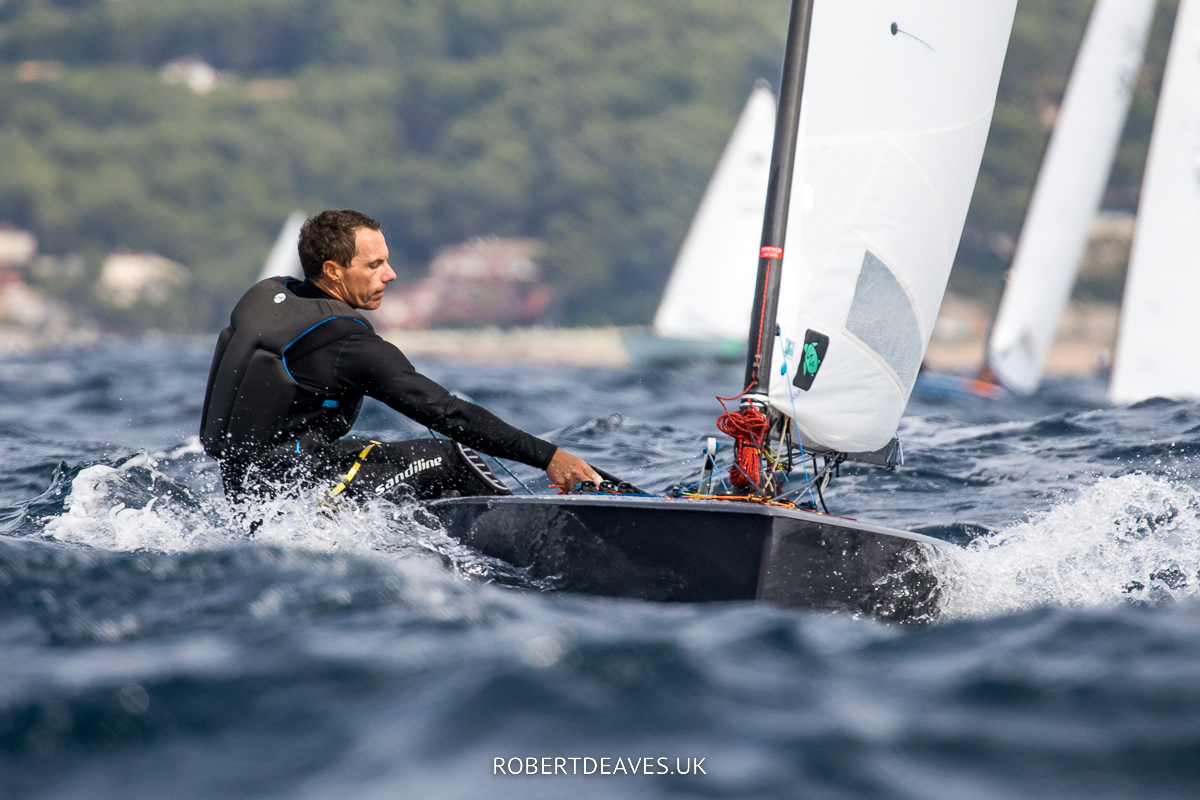 Overnight leader Lebrun said, “I’ve travelled all over the world to go sailing and this is one of my favourite places to sail. The conditions were just amazing with around 15-18 knots all day long with huge waves that you could surf for 100 metres, so it was just a very fun day but also very exhausting. In the last one you could feel that everyone was so tired. So, I think tonight everyone is happy to be onshore enjoying a few beers. Hopefully tomorrow will be the same conditions.”

On his performance, “In the first one I was second. The Dutch guy was very fast upwind, but I was able to catch him a bit downwind. I was very fast downwind today. And the second race was pretty close until the last downwind when I caught some good waves and got an advantage and won that one.

“The last race was much more complicated with a big left shift at the start and I was feeling tired so I didn’t want to take too much risk at the start so I was a bit too conservative. But I slowly managed to catch some boats, to finish fourth, so not too bad.” 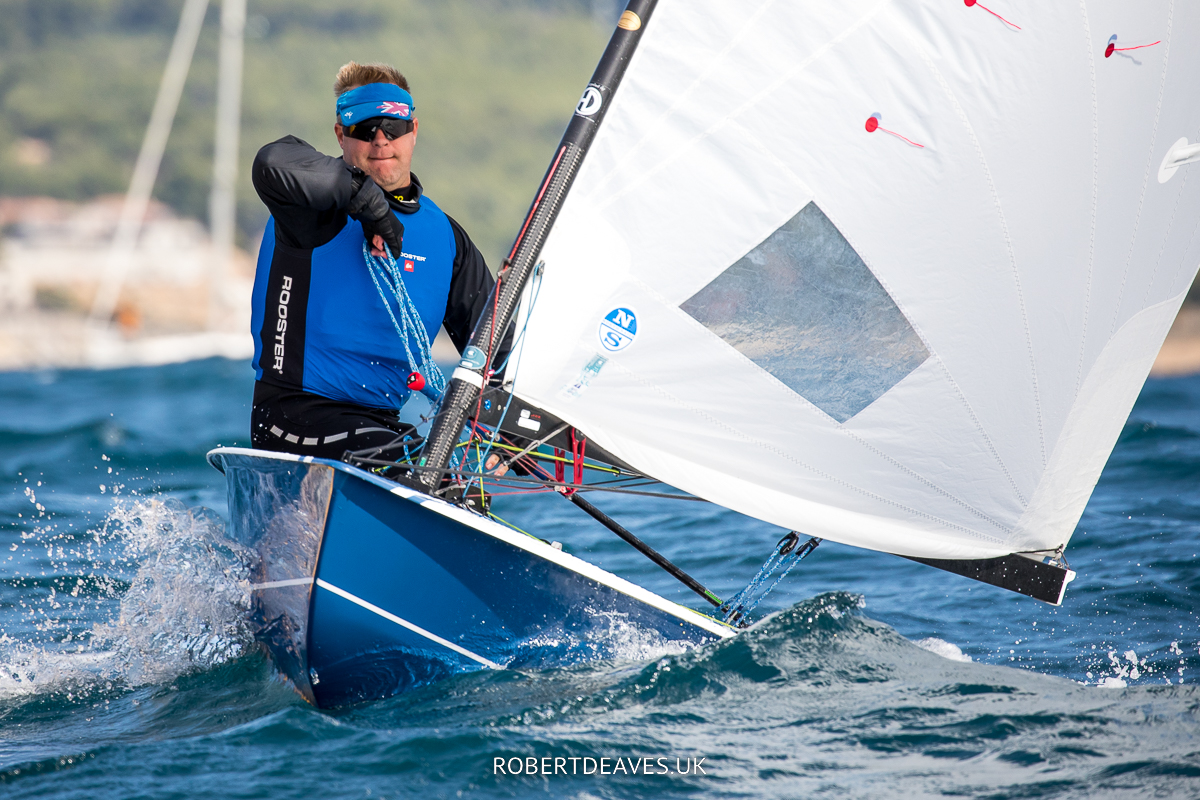 Russ Clark, the new British champion, is in fifth place.

“Today was a great day in the water today, with anywhere between 12 and 20 knots and big waves left over from the mistral yesterday. It was super competitive on the start line. Everyone was on it, so we had few general recalls, but eventually got away.

“And I’m really happy with my performance. Going really well upwind and a lot to learn downwind. There are some experts in the fleet, and it’s been a cracking day out. I finished with a 5,5,6 and very happy with that. There’s a lot to play for and looking forward to tomorrow.”

Three more races are scheduled from 11 on Friday. Racing continues until Saturday. 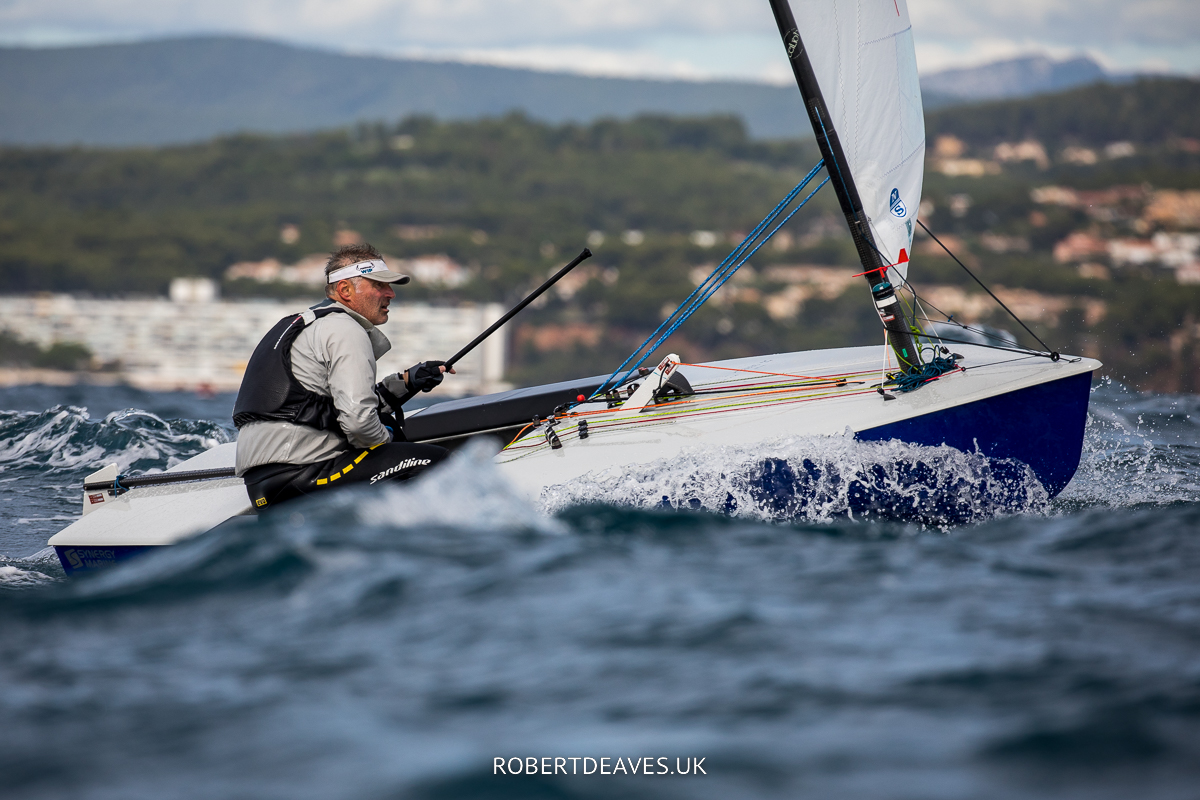